The origin of steel windows dates back to before the 1900s. Steel, specifically Hot Rolled steel was becoming more popular in industry as there was a need for a more robust material. Cast iron was typically being used, however it is very brittle and prone to cracking.

Once the technology for hot rolling steel was discovered it began to replace iron as it was a more ductile material and more resistant to cracking.

Throughout the 1920s, and until the 1950s, steel windows were commonly used in large apartment and commercial buildings in both the United Kingdom and the United States. This is why steel frame windows and doors are very popular amongst Interior Designers and Architects on both sides of the pond.As the steel windows were frequently used in industrial properties, the steel was often left bare, or given a single prime coat. Although the windows would last a life time (and more) it resulted in windows that were known for rusting.

The slender sight lines and natural strength of steel meant that the windows and doors gained in popularity in modern architecture. Also, the addition of weatherstripping, glazing beads and insulated glass units allowed for steel window products to compete in thermal performance with it’s aluminium and timber rivals.

The W20 and W40 profile systems were produced to provide an upgraded product that would be able to accommodate for deeper double and triple glazed units. Meaning better thermal efficiency could be attained.

Nowadays with modern technologies, such as hot dip galvanising and powder coating, steel windows and doors have had their life extended. The coating of steel with a protective layer of zinc results in a steel that is extremely durable to the elements. A powder coated paint layer also protects the steel whilst leaving the metal with a luxuriously smooth finish that is unrivalled by other materials. 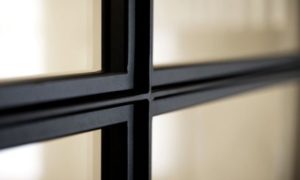 Find out more about the W20 Profile HERE.